Continued from Chapter 1: The Meeting

And so the young woman who sat in the same chair as many others before her, (listening to their own stories told for the first time) pulled up her lungs and her courage and with a determined exhale…”Yes, grandmother. I would like to hear a story.”

The old woman still counting on her rosary, with lowered eyes, whispered a prayer:

Then, after a thoughtful moment asked, “Tea?” with a mix of pride and humility, “From my own garden.”

As she poured pink liquid into two porcelain tea cups, the scent of roses filled the parlor.

“Mmmm…”. The young woman sipped the pink brew; inhaled, and then, settling into the chair, allowed the fragrance to work its magic.

Only a reflection of themselves, to which both were quite pleased.”

“And the boy said, ‘Come with me and I will show you things you have never seen before.’ To this the girl replied, (and here the grandmother spoke in a high pitched quixotic tone which made the young woman giggle) ‘Oh my beloved, you will I follow to the ends of the world and to the end of all time.’”

“Sounds like somebody we know, eh? This was her first mistake, no?”

“Yes, yes” the young woman nodded in agreement blushing the same color as her tea.

“Yes. Sometimes kicking and screaming.” And here the old woman gazed out the window and then shook her head as if to shake off an old memory. “But sometimes laughing too, yes?”

The young woman through a single tear agreed, “Yes, sometimes there was laughter.”

“So off these two kids went until they came to the edge of a strange dark forest where the boy stopped and said, ‘We must go into the forest. In there is someone who needs me.’”

“Now, the girl did not want to go into the dark scary forest and she protested, but the boy said, ‘You promised to follow me.’ So, in they went.”

And the young woman sitting on the edge of the chair, “Grandmother, what happens next?”

“Ah, you will have to come back again for now my time is up and another is waiting.”

So, the young woman thanked the grandmother and promised to return another day.

She went home, kicked off her expensive leather shoes, and said a prayer.

I am Your servant.

“Don’t talk to me of love!” The old woman spat one hand counting on her rosary the other making gestures toward the heavens, “You know nothing of love!”

The young woman who came wearing a tailored business suit and expensive leather shoes felt the sting of embarrassment (pretending she might somehow impress the grandmother) but the old woman was too sharp–and too compassionate. She saw right through the young woman’s insecurities.

And this, the young woman found comforting.

“Now,” the grandmother continued in a slightly softer tone with an accent reminiscent of old fairytales, “You would like to hear a story, no?”

It was for this very reason the young woman sat in the strange parlor and why the old woman’s reputation as a storyteller brought her not only fame but infamy as well. Some said, “she is a witch!” as they were frightened by her stories and what they might reveal. Others came with large amounts of money expecting great boons.

“Fools!” she would say turning the latter away and shrugging her shoulders at the former.

“Some people think they can buy what is already inside, and others are too afraid to look.”

And so, the young woman who sat in the very same chair as many others had before, (listening to their own stories told for the first time) pulled up her lungs and her courage and with a determined exhale…”Yes, grandmother. I would like to hear a story.”

With a heart full of gratitude,

This piece I’ve previously posted however, with respiratory illness, social isolation and fear rampant, I thought it nice to revisit now. A bit of romance to lighten the heaviness we are all currently experiencing.

I hope for us a brighter future, even as we endure the dark days ahead, and may we always remember–God is our safe haven, even as we stumble along…trip, fall, get back up again! Story of my life.

Thank you for listening. 🙏🏻

This song, sung in a Patsy Cline sort of soulful country twang way, is about a break down in communication between lovers, things left unsaid, and the inevitable.

If I were to die today

What would I leave behind?

What memories would you have of me

What secrets would you find?

I’ll write it in a love letter and

Hide it in a book–

Place it on a shelf, my Love

Where I know one day you’ll look…

Say what’s on your mind.

One day it may be too late.

As far as heaven is from hell

I think of you and it is well.

Your friendship to me, a blessed Godsend

Kind words freely given do a broken heart mend…

So, if by the fates in this life our paths never do meet

Remember dear friend, my love for you remains ever sweet.

Surrendered to Love, the battle is won.

For all the space between us, I know that God is ever near. 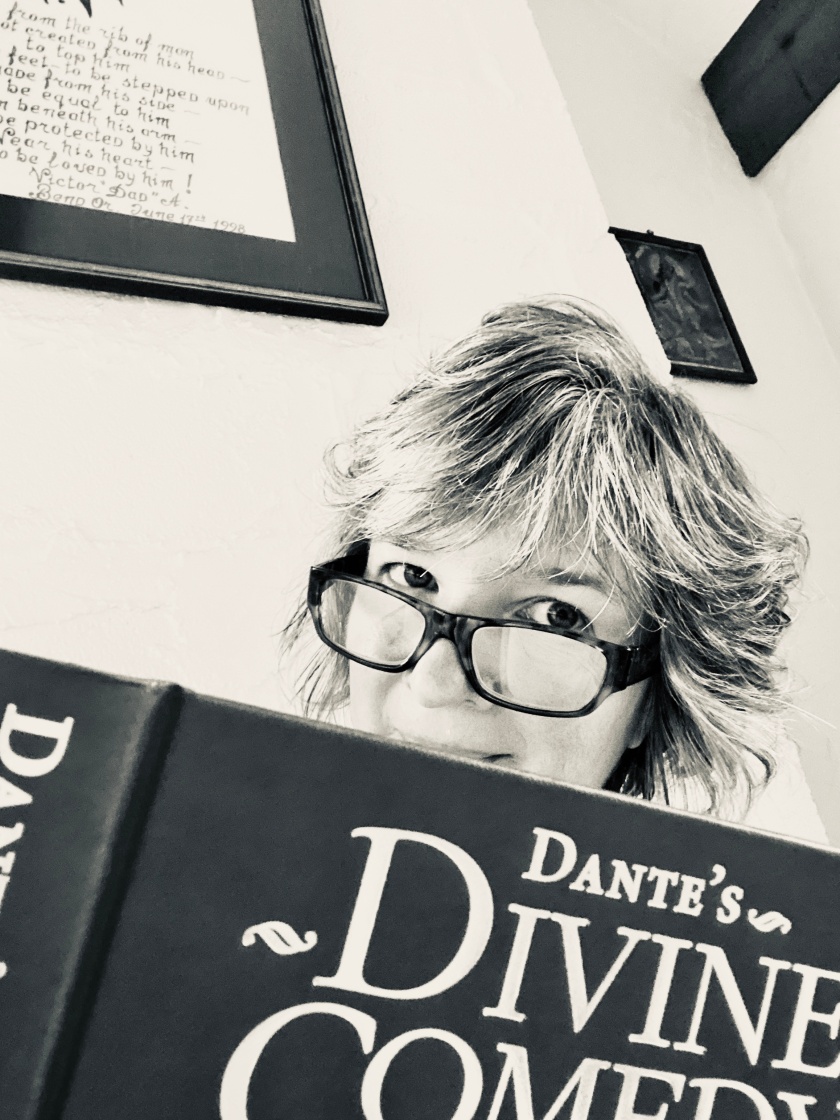 Nothing I write at the moment seems necessary or important, except to say I am doing the best I know how to stay home, healthy, strong and positive–for me, for you, for ALL of this “Divina Commedia”. I am glad we are all in it together, for without YOU–what would any of this life matter? To be alone would be hell…and maybe this is the lesson to learn?

Grateful for waking up this morning

Grateful for our ability to connect with others around the world

Grateful for a hot cup of tea

Growing Up…
Blog at WordPress.com.